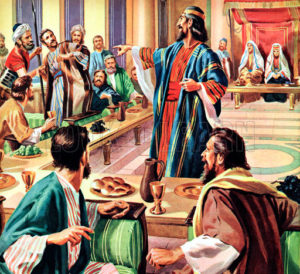 THE Kingdom of God is a gift. Though we did not deserve it, God offered it to us. But we have to make a response. As recipient of the gift, we need to live a kind of life that the gift demands. Let us first describe the gift. Actually, it is difficult to describe the Kingdom. Since it partakes of the nature of God, it is therefore mysterious. No wonder, the Bible often resorts to images to capture some of its aspects, and an image that is frequently used, as in today’s Gospel and in the First Reading, is the image of a banquet. In the First Reading, Isaiah depicts it as a messianic banquet on mount Zion, the figure of the new Jerusalem, in which people no longer suffer hunger and want nor endure suffering and death. On the contrary, they experience a fullness of joy and gladness, peace and reconciliation, for it is none other than the life of God himself. Thus Isaiah: “On this mountain the Lord of hosts will provide for all peoples a feast of rich food and choice wines, juicy, rich food and pure, choice wines. On this mountain he will destroy the veil that veils all peoples, the web that is woven over all nations; he will destroy death forever (Isa 25:6-7).

But how are we to experience this life of God? As already noted—and this is what the parable stresses—this life in the Kingdom is a gift, sheer gift, from God. People are merely invited to it. As we saw in the commentary last Sunday, God called Israel to it, and to take care of it. That is why he sent his prophets and, ultimately, his Son, to remind her to respond to the invitation. In today’s Gospel, the invitation was issued to the leaders of Israel, because they were entrusted with the duty of shepherding God’s people. In the story, it is the invited guests who represented them (Matt 22:3). However, instead of welcoming the invitation, they rejected it and even did violence to the messengers, the prophets, sent. To punish them, the king destroyed the murderers and burned their city. Here, Matthew seems to suggest that if the city of Jerusalem was burned down by Roman soldiers, it was because the leaders of Israel murdered God’s messenger and rejected the offer of the Kingdom of God.

With the refusal by the leaders of Israel, those who were outside the respectable Judaism like the tax collectors, the sinners, and the Gentiles, received the invitation instead and accepted it. No doubt, Matthew here is trying to explain why in his Christian community there were tax collectors, sinners and Gentiles. It is also possible that Matthew is making an apologia for the mixed membership in his community—Jews and Gentiles, sinners and saints. But an even more important point that Matthew tries to bring across is this. To be invited to the Kingdom of God is just a first step in the process of salvation. A more significant question for those of us who have been invited is whether we make the appropriate response to the invitation. Thus, in the parable, the King went to the banquet hall to see whether the invited guests wore garments that were appropriate to the occasion (Matt 22:11-12). To understand the meaning of the wedding garment, it is best to see its usage in the Bible. In Isaiah, it is connected with justice and salvation: “For he has clothed me with the robe of salvation and wrapped me in a mantle of justice” (Isa 61:10b). In John, it has reference to good deeds (Rev 19:8-9) and upright life (Rev 3:18). For Paul, it means equality and unity (Gal 2:22-27). These few biblical references make it clear that by garment is meant a new life, one that matches the new status that God has called the person or community to. For this reason, if sinners are invited, the appropriate response is obviously to change their sinful life and embrace the values of the Kingdom of God.

That is the point of the parable of the wedding banquet in the Gospel today (Matt 22:1-14). Out of his goodness, God called us to the Kingdom of God, his pure gift that we do not deserve. And we are to be thankful for it. But it is not enough to receive it. Along with the reception comes the responsibility that the gift demands. Once we are remiss with the responsibility, God could treat us in the way the King in the parable did the man who had no appropriate clothes—he was whisked off from the banquet (Matt 22:13). The parable is thus a parable of judgment. And so, like the parable last Sunday, this one also calls for our self-examination as Christians who were called to a new life. For it happens that for many Christians, it is enough that they have been baptized, that they have been accepted to the Christian community. However, to fulfill their promise to renounce Satan and all his works, to be transformed by the word of the Gospel, to engage in the work of justice and peace—it is not infrequent that Christians forget to do these and similar demands of their faith. It is time therefore that we do not forget the saying, “the invited are many, the elect are few” (Matt 22:14) to warn us of the divine judgment once we fail to live according to the values of the Kingdom of God.