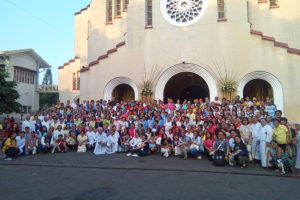 MANILA, April 26, 2017 -– A Catholic priest called on devotees of Our Mother of Perpetual Help (OMPH) to put their devotion into action through various works of mercy.

Hundreds of delegates are currently gathered at the National Shrine of Our Mother of Perpetual Help for the 4-day Baclaran international Pilgrimage-Congress, which started on Monday.

With the theme, “Icon of Compassion: Our Mother of Perpetual Help in the 21st Century,” the event is in celebration of the 150th Jubilee of the Icon of the Blessed Mother.

In his message to the delegates, Baclaran Church Rector, Fr. Carlos Ronquillo, said the gathering seeks for a deeper understanding of “debo-misyon” (devotion-mission) and its implications into people’s lives.

Specifically, according to him, it’s a “summons to discover God in the thousands of muted voices of the poor who come to the Shrine to ask the prayers of Mary in their needs and struggles”.

“Debo-misyon calls us not only to strengthen our devotion to the Blessed Mother, but also to re-invigorate our missionary commitment to make God’s mercy alive in our time,” Ronquillo said.

“Likewise, let us affirm in this pilgrimage that any devotion devoid of mission would not be genuine, it could be tantamount only to a big show,” he said.

More than 300 local and international pilgrims are attending the Congress, deemed by organizers as an occasion not only to celebrate and be thankful, but also to continuously discern the significance of the devotion to the realities happening in the world.

Fr. Victorino Cueto, the Convenor of the Joint Commission OMPH 150, said that when Pope Pius IX entrusted the Icon to the Redemptorists, “his instruction was very specific— make her known throughout the world”.

“Since the event is missionary in character, we are hoping that all of the participants would have the inspiration that they are now devotee-missionaries,” he said. Niceforo Vince A. Balbedina III, CSJL intern/CBCPNews