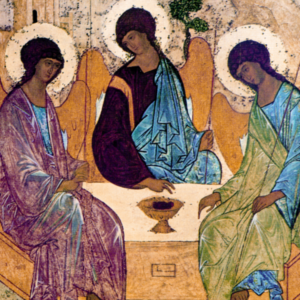 TODAY’S Gospel (Matt 28:16-20) is almost universally called the Great Commission. Here, the Risen Lord instructs the eleven to make disciples of all nations, baptize them, and teach them to observe everything he commanded them.  In this commission, we have an explicit reference to the Father, the Son and the Holy Spirit in whose name one is baptized.  This is obviously the reason why the present text is read on this feast, even if the thrust of the passage is not about the Trinitarian understanding of God.  It may be observed that to baptize in the name of the three persons has become the classic baptismal formula, and the verse in question is the earliest evidence for it.  The Father, Son and Spirit appear in juxtaposition, as if to say that they are equal.

Despite the fact that the three persons of the Trinity are named, it would be wrong to think that the passage bears the dogmatic meaning it was given, as a result of development through the Trinitarian controversies, in later centuries.  The Confession of three persons and one God developed in an effort to account for the full implications of the mystery of Christ, whose life reveals that God is Father, Son and Spirit.  The classical formulation of the doctrine was framed in the language of Greek philosophy which, unfortunately, is beyond the understanding of most of us.  The consequence is that the doctrine emerged as something foreign to the daily life of Christians, appearing as it does as a mathematical problem to be solved.  Of course, the dogmatic formula is a necessary, given the culture and world view of the time; but this does not prevent us from going back to the biblical understanding to see it relevance to our practical life as Christians.

Far from bearing the meaning of the Trinitarian definition of Nicea, the conception that God as Father, Son and Spirit reflects the Matthean community’s understanding of God in his dealings with men.  For the Christians, God is not an immutable being, unmoved by the contingencies of human history.  It may make sense in philosophy to say that God is a simple being, unaffected by the pain and suffering of humanity, and a unitary being, dwelling alone and beyond the access of humanity.  On the contrary, the understanding of God as triune comes from the Christian experience that God is very much involved in the affairs of men.  Rather than isolating himself from his creatures, God opens himself to them, seeking them out in love.  John articulates it very well when he says that God is love (I John 4:8).  It is in the nature of love to be self-diffusive, and this gives us an inkling why God is not an isolated God, but a Trinity who meets us in love.  That love is seen in Jesus who gave us his life for the ransom of all.  Again, John perfectly enunciates it: “God’s love was revealed in our midst in this way: he sent his only Son to the world that we might have life through him.” (1 John 4:9).  And he continues to diffuse his love and mercy by the power of the Holy Spirit who dwells in the Christian and in the community.  Such an understanding of God is not foreign to the thought of Matthew who emphasizes the personal relationship between the Father and the Son, and the share of the disciples in that relationship through the Holy Spirit.

If it is in the nature of God to be Trinitarian, this implies that one cannot be a Christian unless he belongs to a community of brothers and sisters in the Lord.  There is no such a person as an individual Christian; for there is no Christianity without a community.  In the words of Paul, “If one does not belong to the body, he does not belong to Christ” (Rom 8:23).  And because God is essentially love, so is a Christian.  Jesus, in the gospel of John, says it well:  “People will know that you are my disciples by gthe love you have for one another” (John 15:35).  Of course, this love is not our love for one another, but the love which we share from the Father through the Son in the Spirit: “Love, then, consists in this: not that we have loved God, but that he has loved us, and has sent his Son as an offering for our sins… No one has ever seen God, yet if we love one another God dwells in us, and his love is brought to perfection in us.  The way we know we remain in him and that he is in us is that he has given us of his Spirit.” (1 John 4:10.12-13).  Or, as John says elsewhere, “God is love and he who abides in love abides in God and God in him”.    (1 John 4:16).