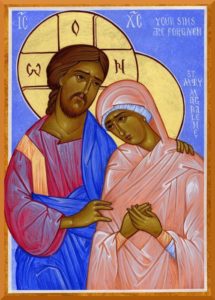 IN a mid-section of a daily, a report is told of a husband named Rosendo, 24, who locked her wife Joanna, 22, in a room and did not give her any food for a whole day just because she failed to wash her pants. But Joanna had had enough of it. Reporting to a police station in Cubao, Quezon City, she claimed that her hubby, a security guard, punched her after she failed to wash the pants that he was supposed to wear to work. She claimed that when Rosendo came home at about 9 pm one evening, she asked him money for food because she was so hungry; instead, her husband beat her up. The report does not tell us what happened afterward, but one can surmise that their case having gone to the police blotter, their marriage is on the rocks, if not on the verge of being destroyed. It is far cry from the ideal, which is a community of life and love. Human weakness that shows itself in the inability to love and care for each other and to be responsible for one another, destroys the unity that binds them. For what the man does to the woman ultimately affects the covenant of life and love.

Like marriage, the Church has also an ideal. If we limit ourselves to the second reading today, we learn that for Paul, the Church, having been freed from law, sin and death, ought to be a community that lives for God: “None of us lives as his own master and none of us dies as his own master. While we live we are responsible to the Lord and when we die, we die as his servants. Both in life and in death, we are the Lord’s” (Rom 14:7). This means that the existence of the Christian is bound to the risen Christ as his Lord; he shares in his life. In everything he does, his purpose is to be of service to God in Christ. At the same time, he is bound to the other members of the Christian community because these share in the life of the risen Lord. They serve the risen Lord through service to the fellowship. In other words, the evidence that one belongs to the community is exhibited by one’s attitude toward the other members in the fellowship. In the Christian community, then, every Christian is bound to the other. This is why St Paul says: “If one member suffers, all the members suffer with it; if one member is honored, all the members shall its joy” (1 Cor 12:24). The whole community is involved in anything that a member does, whether good or bad.

Consequently, when a member sins against another, the persons affected are not just the two of them. When Joanna reported the maltreatment by Rosendo to the police, the husband and the wife were not the only ones involved in the scandal. Their children surely suffered public ridicule. When a wife commits adultery, it is not only her husband who is affected; the children live through the hell of it all, and the whole family is in a mess. The same is true of the Christian fellowship. When a member sins against another, the Christian community experiences cracks in its unity and the whole body suffers. Too often, even among Catholics, this dimension of sin is missed. Many think that when they sin, it is God alone whom the offended, or the brother directly involved. Because of this misunderstanding about the nature of sin, the sacrament of reconciliation is little understood. A little appreciation of this sacrament indicates that when someone sins, he sins not only against God and the person involved, but against the whole Christian community, to which the sinning member and the offended party are closely bound spiritually, theologically and sociologically. In the Church, every sin has a social dimension that always involves the whole body, even though it is not personally felt by every member.

Precisely because the members suffer from the sin committed by a single member, the cracks in the unity of the community must be repaired. But in order to preserve the unity and restore the fellowship, what is necessary? Vengeance, of course, is out of question. In the fellowship of mind and heart, only forgiveness can restore the broken relationship. Of course, here we are not dealing with infractions that are very serious. We are concerned here with infractions that are committed every day, most of them trivial and unintentional. Those that are serious were the subject of the Gospel last Sunday. This Sunday’s has to do with trespasses that are commonly encountered in Christian living with others, but that have to be resolved because they affect the fellowship. One cannot but be concerned with them especially once they are repeated. Which explains the question of Peter: “Lord, when my brother wrongs me, how often must I forgive him? Seven times?” (Matt 18:21). Peter, of course, knows that the infraction must be repaired by forgiveness. The sense of the question, however, seems to suppose that the sin of the brother has been repeatedly committed despite admonition by community members, and therefore have become a straining factor in the relationship and fellowship of love.

For Jesus, to the forgiveness of such infractions, there cannot be any limitations: “’No,’ Jesus replied, ‘not seven times; I say, seventy times seven times” (Matt 18:22). Because they are disruptive of the fellowship, such sins must be forgiven without limit, because to do otherwise would deprive the community of its wholeness. In forgiving the brother, the offended party not only frees the offender from the bondage of sin; the injured member is himself given freedom, for without forgiveness, his heart will be filled with resentment and bitterness, which may even take a permanent home in it. And once they pollute the mind and poison the heart, it is possible that resentment and bitter will irreparably destroy the relationship and the fellowship. But this is not to say that it would be easy to forgive. There is no problem if the infraction is repeatedly only once. But if it is repeated say fifty times, that certainly calls for a really Christian disposition—much like forgiving one’s enemies, or turning the other cheek to one who slaps the right one.

Because it is difficult to forgive without limit, Matthew holds up the forgiveness of God as a model to imitate by telling us the parable of the merciless official (Matt 18:21-35). To forgive once is human, but to forgive without limit is divine. Human nature sets limits to forgiveness, but what is distinctively Christian is to remove them. God is always lavish in his forgiveness. This is the main point of the parable, well illustrated by the king who easily cancelled the debt of his servant who owed him ten thousand talents, something like fifty billion pesos in today’s currency exchange. Indeed, even when we do not ask for it, God already gives us. “While we were still sinners, God died for us” (Rom 5:8).