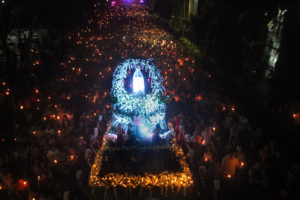 MANILA, October 27, 2017–The Catholic Church will be using an image of Our Lady of Fatima in a procession against extrajudicial killings along the historic Edsa highway on November 5.

It’s the same image that devotees brought to Edsa in the peaceful “people power” revolt in 1986, facing tanks and soldiers of the late dictator Ferdinand Marcos.

The Catholic Bishops’ Conference of the Philippines (CBCP) said it will be a prayerful gathering for the “healing of the nation” marred by division and killings as a result of the government’s war on drugs.

Archbishop Socrates Villegas, CBCP President, said it’s not meant to cause unrest in the country, as he assured that the Church will not encourage any attempts to destabilize the government.

“Hindi po tayo manggugulo. Huwag na po natin guluhin ang ating bayan,” Villegas said. “We ask the Lord for healing of our land, healing of our people so we can move forward in peace, in prosperity, for all.”

“With Our Lady of Fatima, let’s pray for the healing of our nation. Stop the killings!” he said. “Healing does not mean turning a blind eye but being conscious to what is happening in our societies and owning to our mistakes.”

This year also marks the 100th anniversary of the apparitions of Our Lady to three shepherd children in Fatima, Portugal.

Archbishop Villegas said the “signs of the times” is calling Filipinos back to God’s fold because “we turned our back to God”.

“We have a stack of sins to repent for. We have a lot to change in our lives,” he added.

The prelate also assured that the gathering, which will start with a Mass at the Edsa Shrine at 3:00 p.m, the hour of the Divine Mercy, is not in any way related to any political colors or groups.

“The color of November 5 is clarity. It is transparency of a conscience that seeks pardon from the Lord. It is the purity of clear water,” he said.

President Rodrigo Duterte earlier tagged the “red” and the “yellow”, apparently referring to the communist rebels and the opposition Liberal Party, as the groups allegedly trying to destabilize his administration.

The CBCP has earlier declared November 5, as “Lord Heal Our Land Sunday” as it called on priests to hold Masses in their parishes for those who cannot go to Edsa.

After the Mass, the Fatima image will be brought in a candlelight procession to the People Power Monument, located about a kilometer away from the Edsa Shrine.

The prayer service also kicks off activities for the 33-day period of the Church’s “Start the Healing” campaign wherein Catholics are requested to pray the rosary until December 8, the solemnity of the Immaculate Conception. CBCPNews