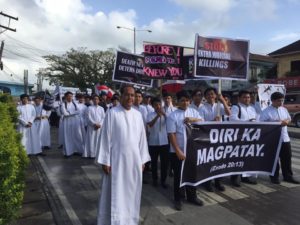 Priests and seminarians join the March for Life held along the streets of Borongan City in the morning of March 4, 2017.  Spearheaded the Knights of Columbus, the march was participated by hundreds of parishioners bearing banners such as “Diri ka Magpatay,” “Knights of Columbus against Death Penalty,” “No to abortion,” “Stop Extra-judicial killings,” among others.  (Neil Tenefrancia / EstesNews)