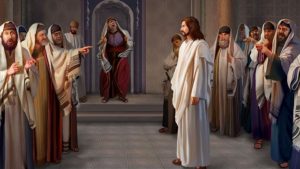 AT the time of Jesus, the Jewish fundamental law was the Torah or the five books of Moses which, according to Jewish scholars, contain 613 precepts, of which 248 are positive commandments, the rest being prohibitions. But because these laws needed to be applied to particular situations, Jewish scholars developed other laws, which became known as Halakah. In Jesus’ time, many people were not as knowledgeable about laws as the Scribes and the Pharisees. Given the plethora of laws to be observed, the Jews needed to know what is central to the precepts and prohibitions so that by observing it, they would not have to bother about the overdevelopment of minor laws in order to be good Jews.

That seems to be the context of the question that a lawyer posed to Jesus in today’s Gospel: “What commandment of the law is the greatest?” (Matt 22:36). Out of the 613 commandments (mind you, not 10 commandments) of God, Jesus cited two. The first one comes from the heart of the Shema, which is an ancient Hebrew prayer lifted from the historical prologue to the Deuteronomic Code: “Hear, O Israel! The Lord is our God, the Lord alone! Therefore you shall love the Lord your God with all your heart, and with all your soul, and with all your strength” (Deut 6:5). The second comes from the Code of Holiness: “You shall love your neighbor as yourself” (Lev 19:18). For Jesus, these two are the most central commandments in the 613 laws of God found in the Torah. What Jesus introduced to his listeners, however, is not the combination of these two. In fact, we already find this in, for example, the Testament of Issachar: “But love the Lord and your neighbor, and show compassion for the poor and the weak” (T.Issac 5:2). What is new here is the view that both commands are on equal plane: “the second is like it” (Matt 22:39a). The second is similar to the first in theological depth, and there is an interrelationship between them. That is to say, although love of God comes first, yet there is no true love of God that is not incarnated in the love of neighbor. The proof that we love God lies in our love for our neighbor. This in a way is reflected in John: “If anyone says, ‘My love is fixed on God,’ yet hates his brother is a liar. One who has no love for the brother he has seen cannot love the God he has not seen. The commandment we have from him is this: whoever loves God must also love his brother” (1 John 4:20-21).

What’s the point we are driving at? Law in Judaism at the time of Jesus has become a complicated phenomenon, with various groups making their own interpretation of the laws of God. Jesus’ audience never had the sophistication of the Scribes and Pharisees, for it was a popular and simple one. Understandably enough, since it was his purpose that the law of God could be easily understood and followed by the common people, Jesus taught them what was so central so that by obeying it, they were assured that they have already followed the whole law. And what is so central is love. That is God’s will for man. In other words, for Jesus, anyone who loves God in his neighbor has fulfilled the whole law. Hence, the additional comment of Jesus to what we find in the Gospel of Mark: “On these two commandments the whole law is based, and the prophets as well” (Matt 22:40). What does this imply? In being Christian, what counts, in the ultimate analysis, is life. But life is not all about laws, and it is too preciously to be placed in the hands only of lawyers. Before anything else, life is about love, and that life is meaningful if it embodies a love of God that is incarnated in the love of neighbor, in the love of others. No wonder, St Augustine could say, “Love, and do what you will.” Obviously, when a person loves, he fulfills what is most necessarily in life, and love is possible for any person, simple or not, even if he does not have the sophistication of a Pharisee. After all, the best lawyer is not necessarily the good Christian; but a lover qua Christian lover surely is.