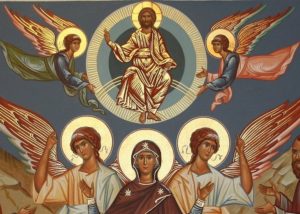 TODAY, WE CELEBRATE the feast of the Ascension to signify Jesus’ final withdrawal from physical presence to his disciples and his risen state that celebrates his victory.  In the first reading (Acts 1:1-11), Luke pictures this by saying that forty days after his resurrection, Jesus, while the disciples were looking, was lifted up, and a cloud took him from their sight.  Luke’s chronology, of course, is not meant to be a literal account of what happened, but simply a way of emphasizing the event which is, theologically, an integral part of one single mystery: the passion, resurrection and ascension of the Lord.  If ascension is celebrated as a separate event, it is meant to underscore the end of Jesus’ physical appearances to his disciples and the new life which he acquired.  In the liturgical celebration, the meaning of the event is well phrased in the preface of the Ascension: “In his risen body he plainly showed himself to his disciples, and was taken up to heaven in their sight to claim for us a share in his divine life.”

But the Gospel (Mark 16:15-20) obviously wishes to stress another point that the feast of the Ascension brings—which is about witnessing to the faith. Witnessing has an honored place in Christian life, and by witnessing is meant simply living out the Christian life.  One does not only profess his faith; even more important, his faith is evidenced by his life.  It is for this reason that we criticize preachers like priests, religious, missionaries and evangelizers who dare announce the Good News but whose life hardly exhibits the same gospel they preach. We tend to think that those authorized to speak the Word of God to others are only those who have lived the Gospel in their lives.  Undoubtedly, this is a sound principle.  As the Romans were wont to say, nemo dat quod non habet, one cannot give what one does not have. One who speaks of justice must first of all be just.  This, in fact, has much basis in the Scriptures.  In various places of the Bible, we are asked to live what we believe.  “You are the light of the world…. your light must shine before men so that they may see goodness in your acts and give praise to your heavenly Father” (Matt 5:14-16).

But must it always be that those who preach the faith should themselves have great faith?  If one’s life does not show his belief, can he not proclaim the Gospel of Jesus Christ?  However sound such a principle, the Gospel today obviously gives us an exception.  For Mark does not hide the fact that the disciples were hard of faith. They were hardly models of belief.  Several times, the Markan Jesus upbraided them for their lack of faith.  When the disciples encountered a storm on the sea, they were scared to death, despite the fact that Jesus was with them.  And the Lord rebuked them: “Why are you so terrified?  Why are you lacking in faith?” (Mark 4:40). After his death, Jesus appeared to Mary Magdalene, but when the disciples “heard that he was alive and had been seen by her, they refused to believe it” (Mark 16:21). Later on, he was revealed completely changed in appearance to two disciples who were walking along on their way to the country, but when these men retraced their steps and announced the good news of the resurrection, the other disciples “put no more faith in them than in Mary Magdalene”(Mark 16:12-13).  And these raise the question: since these disciples lacked faith, should they be allowed to preach the Gospel of Jesus resurrection?  How could they tell others of something that they themselves were not convinced of?

Nonetheless, in today’s Gospel, Jesus commanded his disciples to preach: “Go into the whole world and proclaim the good news to all creation.  The man who believes in it and accepts baptism will be saved; the man who refuses to believe in it will be condemned” (Mark 16:15-16).  Strangely, the disciples Jesus commissioned to preach were the very the same people he upbraided for their unbelief: “He took them to task for their disbelief and their stubbornness, since they had put no faith in those who had seen him after he hade been raised” (Mark 16:14).  He did not wait for a time when the disciples could show great faith.  Obviously, he was convinced that if his disciples preach the Gospel, they would acquire faith in the process.  Obedience to Jesus’ Word gives birth to faith.  Unbelief is conquered by putting man in the service of faith.  Of course, the dimensions of unbelief are evident in the practice of many Christians—their trust in power and money, their secular attitude, their neglect of the poor, among others.  But how are we to overcome them?  Obviously by commissioning them to preach.  The grace of conversion is given to those who listen to his Word and proclaim it.