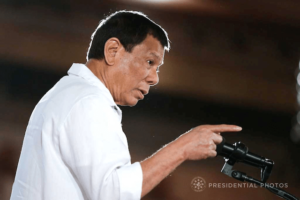 The survey, conducted from June 27 to 30, reported that Duterte’s gross satisfaction score fell by 5 points from the previous quarter’s 70 percent to 65% in June. Meanwhile, 20% are dissatisfied with the performance of the President.

The gross scores give a “good” net satisfaction rating of +45, an 11-point decline from March’s 56+ net rating, which is classified as “very good.”

Duterte’s satisfaction rating is also down among both men and women, with the former recording a net grade of “good” at +46 (66% satisfied, 19% dissatisfied) and the latter at +45 (65% satisfied, 20% dissatisfied).