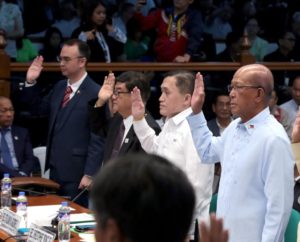 MANILA, February 19, 2018–Defense Secretary Delfin N. Lorenzana said there appears a “concerted effort” to cast doubt on the acquisition project which costs over P 16 billion and even the entire procurement system.

In his opening statement before the Senate Committee on Defense, Secretary Lorenzana said the issues being thrown against the frigate acquisition project “is hurting the very institution that is taked to defend our country from internal and external threats.”

He admitted due to personal interest, the Philippine Navy and the entire Armed Forces of the Philippines have been “negatiuvely affected, casting shadow on the positive accomplishments” over the years as an institution.

Secretary Lorenzana said the completion of the modernization program which includes the frigate acquisition program is essential to the country’s total defense.

“The project should not be delayed, especially, in the light of our evolving external security threats,” Secretary Lorenzana said.

He assured the Philippine Senate, particularly the Committee on National Defense and Security chaired by former rebel leader and now two-term Senator Gregorio Honasan that the procurement process are done and completed strictly in accordance with existing Philippine laws.

Mr. Lorenzana said there was a “deliberate attempt” to delay or stop the completion of this project by the former Flag-Officer-In-Command (FOIC), Vice Admiral Ronald Joseph Mercado.

He said the former Philippine Navy head was insistent in his desire to enforce his will on the builder of the frigates, Hyundai, “to install a specific brand of combat management system or CMS in the two frigates.” Mr. Lorenzana said Mercado’s demand “is clearly prohibited under the procurement law.”

He added Vice Admiral Mercado “challenged and usurped the authority” of the Secretary of National Defense such as directing the owner’s team in Korea.

The former flag-officer-in-command “exerted” his influence on the project management team and intervened in the processes and outcome of the project.

Mercado was reported to have threatened to have the contract cancelled if his preferred CMS was not installed.

Secretary Lorenzana said his loss of trust and confidence on the naval officer was the reason for the latter’s relief as head of the Philippine Navy.

Lorenzana cleared the Office of the President and Secial Assistant to the President Christopher “Bong” Go or anyone from the Presidential Management Staff or anybody outside the Defense establishment attempted to influence the frigate acquistion project.

“That if there is anyone who tried to influence the frigate project as early as 2016 it is no other than Vice Admiral Mercado,” Lorenzana concluded. (Melo M. Acuna / Bicol Times)