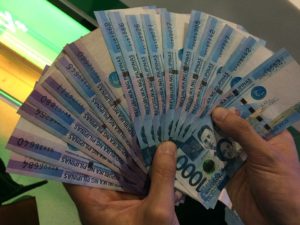 MANILA, July 20, 2018–The Bangko Sentral ng Pilipinas (BSP) on Friday, July 13, has tapped the National Bureau of Investigation (NBI) to identify individuals that have been “maliciously” posting photos of fake Philippine bills on social media.

In a press statement, the Central Bank said the requested support of the NBI is connected with the recent online and social media posts that feature fictitious Philippine currencies.

“The NBI has also been requested to look into the identities of those who have initiated the circulation of ‘fake news’ to deceive the public or generate entertainment from manipulated images of Philippine banknotes and coins on social media or any website on the internet,” BSP said.

In late June, Facebook page “Filipino Secret Files”, that has over 126,000 followers, posted a photo of what appeared to be a Php10,000 banknote.

The Facebook page, that has 121,000 “likes”, claimed that the BSP issued the supposed new banknote in the same month.

Under the New Bank Act or “Republic Act No. 7653” (RA 7653), the BSP has the sole power to issue currency within the Philippines.

Section 50 of RA 7653 states that “(n)o other person or entity, public or private, may put into circulation notes, coins or any other object or document which, in the opinion of the Monetary Board, might circulate as currency, nor reproduce or imitate the facsimiles of Bangko Sentral notes without prior authority from the Bangko Sentral.”

A provision of the Act adds that BSP is likewise vested with police authority to investigate, make arrests, and conduct searches and seizures in accordance with law, for the purpose of maintaining the integrity of the currency.

“The public is likewise encouraged to be judicious when encountering unofficial information on Philippine currencies on social media and the internet,” added BSP.