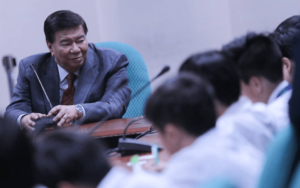 “It is not possible to remove the holding of elections without the corresponding law. That is why this is being pushed so that there will be a law postponing the elections in May 2019,” Drilon told DWIZ in a live interview.

“This is what is says, that the purpose of this ChaCha is ‘no election.’” he added.

The administration is currently pushing for ChaCha from a unitary form to a federal form of government.

With the term of some government officials expiring on June 30, 2019, the Senator speculated that the “holdover” of elections will permit the President to appoint the unfilled positions.

“What will happen next? All of these government posts, the President will appoint,” he said.

“Do we [really] need to amend the Constitution now?” he added.

Drilon said administration should instead shift its focus to addressing poverty rather than amending the 1987 Philippine Constitution.

“Many people suffer from poverty. These are the issues that unite rather than issues that divide,” he said.

“Maybe our countrymen think we should deal with these issues first rather than amending the Constitution,” he added.

On July 12, House Speaker Pantaleon Alvarez suggested that the Duterte administration should cancel the 2019 midterm elections in order for lawmakers to “focus” on tackling the changes in the Constitution.

“How can we have quorum? Of course congressmen will campaign – it’s elections, it’s survival. So how can we work on proposal to revise the Constitution?” Alvarez was quoted as saying by the Philippine Star.

“If we really want to get it done, we really need to carefully study the timetable,” he said.

“Focus is really needed, we can’t do it (Charter Change) recklessly,” he added. (Joel Cristobal/LuzonTimes)