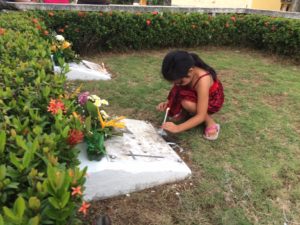 Rev E Belizar, Jr, SThD
Diocesan Commission on the Doctrine of the Faith

The Problem
There are a number of superstitious beliefs and practices in parts of Borongan and Eastern Samar associated with death and burial that may cause great concern among ordinary faithful and priests. Here are a few examples:

(1) When a funeral procession passes by the deceased person’s house twice, it brings evil or bad luck to the family. Hence, the family insists that the funeral Mass be held in another church or chapel that keeps them from making the double passage;

(2) Before the deceased person’s remains are carried out of the house, bottles or plates are smashed into pieces to break the possible cycle of death;

(3) A chick is placed over the coffin to petition for the deceased safe passage to the other life.
There may be other related phenomena.

What is a Superstition?

It is a word which, according to St Isidore of Seville, is rooted in “superstatuo” or “supersinstituo” that is, it refers to “observances added on to prescribed or established worship” (Etymolog., I.8, c iii, sent.). St. Thomas Aquinas defines superstition as “a vice opposed to religion by way of excess; not because in the worship of God it does more than true religion, but because it offers Divine worship to beings other than God or offers worship to God in an improper manner” (Summa, II-II: 92:1). That is, any belief system and/or the practice(s) that it brings about in a manner opposed to the worship of the true God could be called a superstition.

Why is the ban on the double passing of a funeral procession by the deceased person’s house etc. superstitious?
(The following may also be said of the other related superstitions.)

(1) Because it attributes truth to a belief that has no basis on reason or Catholic teaching;

(2) it seems to believe more in the ability of evil sources to inflict harm than in God’s almighty power to prevent it;

(3) it seems to indirectly encourage worship or adherence to (evil) beings or entities other than God.
The Catechism of the Catholic Church teaches that the first commandment (Ex 20:2-5) “forbids honoring gods other than the one Lord who has revealed himself to his people. It proscribes superstition and irreligion. Superstition in some sense represents a perverse excess of religion” (CCC 2110).

(4) it has reduced the funeral Mass to a mere social ceremony for burial, useful to establish closure but seemingly powerless over possible evil;

(5) it has deviated religious feeling and its practice from the true God and true worship to a false one. This it does by attributing “an importance in some magical way” (CCC 2111) to the power of a superstitious practice to ward off evil or bad luck.

(1) Parish priests, pastors and authorized lay persons must carefully and tirelessly catechize the faithful on the Christian teaching on death and the afterlife;

(2) they must also pinpoint superstitions and clarify why they oppose true faith;

(3) parish priests and pastors shall not allow practices originating from superstition, such as celebrating the Eucharist in another church aimed at avoiding double passing funeral procession;

(4) priests who are requested to officiate funeral Masses in a church or chapel outside their jurisdiction or assignment shall seek first the reason behind the request and the expressed permission of its pastor-parish priest;

(5) better communication and coordination among parish priests and parish catechetical commissions shall be encouraged to avoid trans-parochial funerals or practices directly or indirectly rooted in superstition;

(6) pastors and faithful alike are to bear in mind that giving in to superstitious beliefs and practices is a denial of true faith and worship.