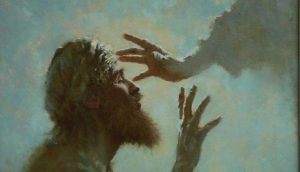 AT first blush, the Gospel would seem to be a miracle story. Luke tells us of a story of a miracle in which Jesus healed the blindness of a beggar of Jericho, Bartimaeus by name, because of his persistent request. However, the manner in which the pericope is situated in the whole Gospel, and the way in which it is narrated in Mark, make it clear that the Evangelist uses the story to teach us a lesson on what it means to follow Jesus. He placed it on the section on the teachings on discipleship that Jesus imparted to his followers on the way to Jerusalem, after having been given the revelation that he was the Messiah. Mark holds Bartimaeus as a model of Christian discipleship. To appreciate this point, we might well compare Bartimaeus with the disciples of Jesus.

The disciples were not blind; their eyes could see. Bartimaeus, on the other hand, was blind; his eyes could not see. But it is he whom Mark holds up for imitation. James and John, for example, were not blind, yet they could not understand who Jesus was. Even though they have already heard of Peter’s declaration that Jesus was the Messiah, yet they betrayed their spiritual blindness in requesting to be seated at the right hand and at the left hand of Jesus (Mark 10:37). Jesus in fact told them they were ignorant of—blind to—what they were asking. In other words, though they saw physically, yet the disciples continued to be spiritually blind (Mark 8:18.21). Even Peter was not an exception. Of course, it was Peter who made the solemn declaration that Jesus was the Messiah (Mark 8:29). It is clear, however, that in Mark’s story, Peter was likewise spiritually blind, though he could see physically. When Jesus spoke openly about the implication of this messianic title, Peter took him aside and rebuked him. Jesus in turn rebuked Peter’s spiritual blindness by saying: “Get behind me, Satan. You are thinking not as God does but as human beings do” (Mark 8:33). Physically blind though he was, Bartimaeus was different from the disciples. Although he called Jesus only by the title “Son of David,”(Mark 10:47—a fulfillment of 2 Sam 7:12-16), yet he requested Jesus to heal him (Mark 10:51). Unlike the disciples, he knew what he was asking—that the Messiah came to save him from blindness: “Master, I want to see” (Mark 10:31).

What made the difference? Bartimaeus was different from the disciples because he had faith (Mark 10:32. The disciples, on the other hand, are described in the Gospel as having no faith at all, or having only little faith. In the story of the calming of the storm, for example, Jesus asked them: “Why are you terrified? Do you not yet have faith?” (Mark 4:40) That is why, they could not recognize Jesus with the eyes of faith, and therefore unable to understand the Lord, his word and his work. In the story of the walking on the waters, Mark remarked that the disciples “were completely astounded. They had not understood the incident of the loaves” (Mark 9:52). Lacking in faith, their hearts were hardened, like Jesus’ enemies (Mark 3:5-6), and could not comprehend what he disclosed to them: “Do you not yet understand or comprehend? Are your hearts hardened? Do you have eyes and not see” (Mark 8:17-18b). It is therefore not surprising that when Jesus was arrested, all of the disciples abandoned him and fled (Mark 14:50). Even Peter denied him not only once but three times (Mark 14:72). Because they were blind, they could not understand God’s revelation to them, even though their eyes could see. That is why they did not follow him on the road to his death.

How different was Bartimaeus! He had great faith. Despite the effort of many to discourage him, his faith did not waver. He persisted in calling out the name of Jesus (Mark 10:48). His faith was so great that he was too ready to put aside his old life, symbolized by his cloak (Mark 10:50). Because of his faith, he never doubted the healing word of Jesus. And abandoning himself to him, he was cured of his blindness—he received his sight. With eyes now open, his faith having the ability to know the power of God working in Jesus, he followed Jesus on the way—which is the same as the way of discipleship (cf Acts 9:2; 19:9.23). As Jesus’ way was to Jerusalem, Mark wants to say that Bartimaeus was ready to follow the footsteps leading to Calvary and to embrace the cross (Mark 10:52b). And once he is crucified with the Lord, he would be able to make an offering to God for others (Heb 5:3; 2nd Reading; see Lev 9:7). In other words, for Mark, Bartimaeus is a model of discipleship. 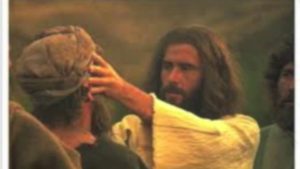 What does this mean for us? We may be blind spiritually—money, power, self-interest, honor and glory may blind us initially, but if we have the faith of Bartimaeus, we can allow Jesus to heal us. He will give us spiritual sight. With our ability to see spiritually, we will follow him on the road to Jerusalem, as we listen to his words and act on them. And our journey of discipleship will culminate in the offering of ourselves for others, for the good of the community of faith.