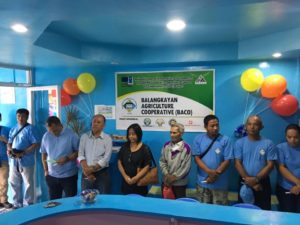 BALANGKAYAN, Eastern Samar, March 31, 2017–Cassava farmers in the town of Balangkayan now have a ready market for their produce.

“Through the Balangkayan Agricultural Cooperative (BACO), cassava farmers in the town are able to sell their crops at a competitive price,” Balangkayan mayor Atty. Allan Contado said.

Initially funded by the local government unit of Balangkayan and UNDP, BACO has contracts with feeds producers in Ormoc who buy the crops.

The cooperative has a warehouse and equipment where cassava, raw materials for the feeds, is prepared.

According to Contado, farmers who want to grow cassava may ask for seedlings from the cooperative at no charge.

“BACO is inviting cassava farmers all over the province if they are having a hard time selling their crops, we will buy them,” Contado said.

Its assistance in the formation of the cooperative is part of the UNDP’s package of interventions for those affected by typhoon Yolanda. (Medora NB Quiranted/Este News)